Sydney puts “it on” for HIV/AIDS prevention!

A large pink condom has donned an obelisk in central Sydney as part of the “Its ON” safe sex campaign by ACON (formerly Aids Council of New South Wales). 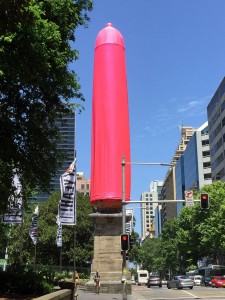 Its hard to miss this impressive installation, reaching high above the treetops along busy Elizabeth Street, Hyde Park.

While not the first of its kind in the world (many monuments world-wide have previously been covered this way to promote safe sex), its nonetheless an unusual and eye-catching visual on the Sydney skyline.

This installation sits on top of a 157 year old heritage sewerage vent (masquerading as an Obelisk), and is part of ACON’s “Test more + treat early + stay safe = ending HIV” campaign.

It’s certainly the talk of the town, as the thousands of passers-by of all persuasions, point, giggle, chat and take photos of – and selfies with – the temporary structure.

While there are medicinal treatments such as PrEP and PEP helping to limit HIV transmission, condoms remain a core method of preventing transmission of HIV, while including many other STIs at the same time.

Congratulations to ACON for keeping the safe sex message in the forefront of Sydney’s mind!